"It’s more than the course … Harper Adams itself brings the best out in people." 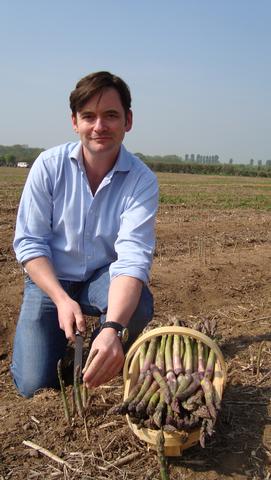 David, 42, from Oxfordshire, graduated with a HND (now FdSc) in Agriculture. After gaining lots of experience in different roles he became Commercial Director of the fresh produce business Evesham Vale Growers. Here he looks back on his time with us.

Before coming to university I spent 15 months travelling around the world. When I returned I didn’t have a place at a university. I was looking at the places still available at universities and colleges through clearing. It was alphabetic and I didn’t fancy accountancy and I didn’t get any further down the list than agriculture! I had the A level grades for a degree but the three-year HND appealed more.

What were the highlights of your course?

The ability to tailor it around subjects that you feel will be relevant to any potential future employment.

Did the course improve your career prospects?

It gives a good grounding in agriculture, but more than the course, Harper Adams itself brings the best out in people. I loved my time on the Students’ Union as Rag Secretary and then Chairman.

Where did you work during placement?

G’s Marketing near Ely in Cambridgeshire. They have since had a name change to G’s Fresh. At the time G’s were a sizeable grower of salad and vegetable crops supplying supermarkets. After a spell helping with lettuce planting I was put in charge of the broccoli growing and harvesting operation. It was a challenging season.

Do you think placement enhanced your career prospects?

Yes. A year’s employment with a very professional and diverse organisation such as G’s is an excellent start and adds much needed experience to the CV.

Tell us about your career.

After graduating I did Master’s degree in Business. After that I took to tractor driving and general farm work near home, working all the hours I could to pay off my student debts. Following that I moved to London and took on a number of temping jobs to gain some office experience. I landed a job at St. George’s Hospital buying medical and surgical equipment. Keen to get back to food and farming I joined Sainsbury’s Graduate Buyer Scheme as a buyer of cooking sauces. After a year or two I was moved into Fresh Produce buying where I held several roles across vegetables and salads.

Having spent several years in London I was keen to get back to the countryside and I joined Evesham Vale Growers as Commercial Director. That was ten years ago.

What sort of tasks and responsibilities does it involve?

Day to day dealing with supermarkets. We are a fully integrated business – growing, packing and distributing a range of salad and vegetable crops to customers.

What do you enjoy most about your job?

The people. And the variety that comes with an all-encompassing role.

What skills/experience was your employer looking for?

They were looking for my background in agriculture and my experience of being a retailer buyer.

How did your qualification/ experiences at Harper Adams aid your career?

I did well in my HND, which then opened the door to get on the Master’s course. This in turn meant that I at least was asked for interview at Sainsburys. About 7,000 people apply for 15 jobs on the Sainsburys Graduate Buyer Scheme, so I was lucky.

Do you think being a graduate made a difference to your position and salary?

Yes. The Sainsbury scheme was only open to graduates, and it fast tracked you through promotions. In my time at Sainsbury’s I was promoted every 12 to 18 months.

What advice do you have for a student interested in doing a similar job?

You need to be confident without being cocky. Listening is often more important than talking. And most importantly work needs to be enjoyable – if it’s not you are doing the wrong thing.

How did you find the teaching at Harper Adams?

Why would you recommend Harper Adams to future students?

They have grown from strength to strength where other agricultural institutions have closed.