"Placement year was the most important thing I encountered, as well as coming from a uni which is so highly thought of in the industry." 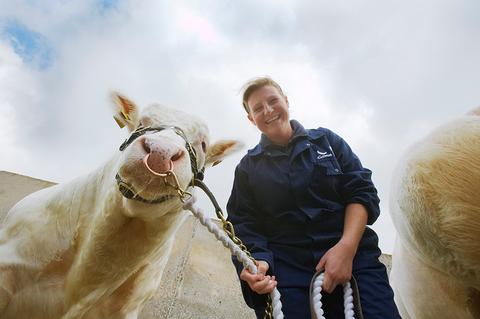 You could be a… breeding programme assistant

Students often get on so well during placement that they are invited to apply for full-time jobs when they graduate. This was the case for Hannah Noble who, having enjoyed her year with Genus Breeding Ltd, returned as a Breeding Programme Assistant, a varied role that she loves.

“I run the Cornerstone young bull testing programme and I carry out all of the allocation of semen each month as well as correspondence with the 3,000 members, taking semen orders and general administration. I also get involved with the progeny promotions side of the job, taking part in photographing progeny of our bulls, representing the business at shows and events. I frequently help out at the bull stud carrying out some lab techniques and health testing bulls. I also do a number of presentations including coming to speak at Harper Adams and Reaseheath College.

“Further to this I am heavily involved in product development on the beef side of the business, dealing with the calving survey and allocation of young beef semen.

The 25-year-old, originally from West Yorkshire and now living in Cheshire, adds: “I think my placement year allowed me to prove I am capable of working in a team and working hard to get any jobs done. I never say no to a challenge and I think they liked that about me. I enjoyed being a really valued member of the team and getting out of the office to take part in a variety of activities.

“The best things about my course were meeting like-minded people and the chance to learn so much more about all areas of the industry. In terms of my career the placement year was the most important thing I encountered, as well as coming from a university which is so highly thought of in the industry.”

A new young farmers club opened in our area; I was 16 and up until then, apart from living on a farm, had very little to do with farming. I didn’t really know any other kids from farms and never thought about a career in the industry. I got involved with everything, took on plenty of roles including Chairman and heard a lot about Harper Adams so decided to look into doing a degree in Agriculture.

What were the best things about the course?

Like-minded people and a chance to learn so much more about all areas of the industry.

Did the course make you more employable?

Placement year was the most important thing I encountered, as well as coming from a uni which is so highly thought of in the industry. A work placement looks really good on your CV and Genus took me back on due to my performance that year.

Fantastic…if you need help, ask and you will get it!

What are your favourite memories of Harper Adams?

The social side and meeting some amazing people.