"Harper Adams gave me the confidence to speak to customers and the engineering knowledge to know the product inside and out." 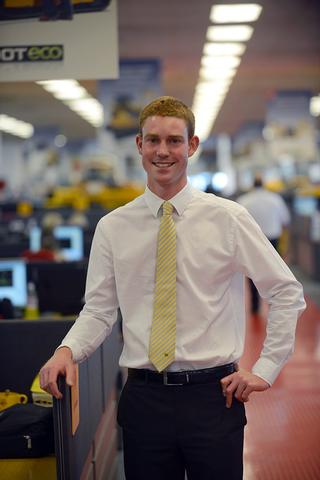 I am an… Export sales engineer

John Plummer, from Gloucestershire, graduated with an MEng Agricultural Engineering in 2012.

“I currently work for JCB Agriculture as an export sales engineer,” says John. “I started the role while I was in my final two years at Harper Adams. I look after dealer training, sales support and customer demonstrations for North America (USA and Canada), Asia Pacific (Australia, New Zealand), France, Netherlands, Belgium Portugal, Spain, Italy, and Germany."

The 25-year-old spent his work placement with the company, working in different roles and departments, and says the experience helped his employment prospects “massively, as it made me realise what I wanted to do and also created a large number of contacts throughout the JCB group.”

Upon completing his studies John hit the ground running: “After I finished university I spent four months in Australia providing sales support for the 8000 series Fastrac and five weeks in New Zealand demonstrating the 434s wheeled loading shovel across the whole country. I have also carried out dealer training in Romania, Italy and the USA.”

His favourite parts of the job, he says, are “Meeting customers, launching new products and helping customers get the best performance from their machines.”

John also spent his placement period at JCB, which he says “gave me a real advantage as it allowed me to experience different departments and roles; engineering, test and development, and marketing. It allowed me to realise what I wanted to do as a career and where I wanted to work.”

He adds: “Harper Adams gave me the confidence to speak to customers and the engineering knowledge to know the product inside and out.”